I need some food - Critical situation for kids in Sudan 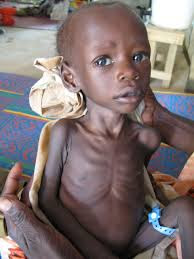 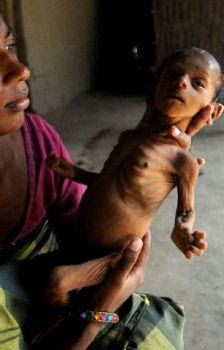 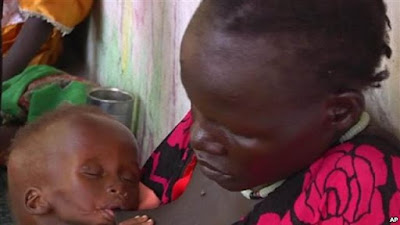 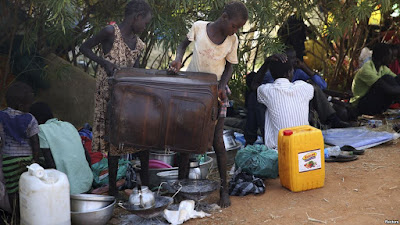 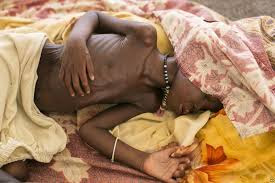 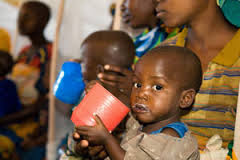 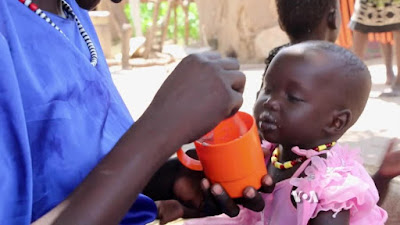 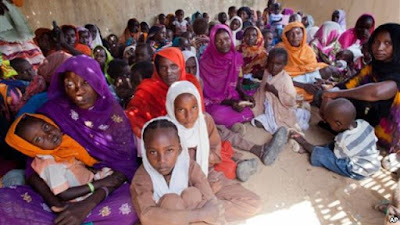 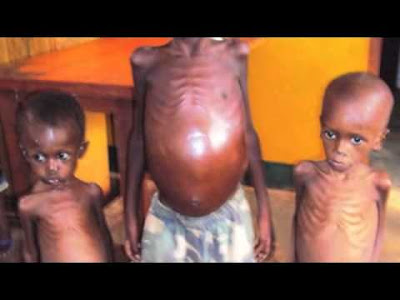 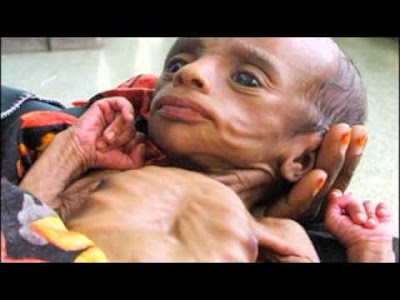 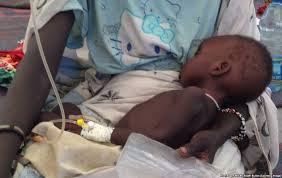 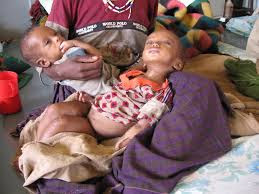 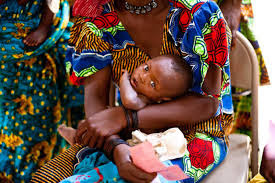 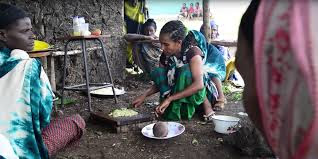 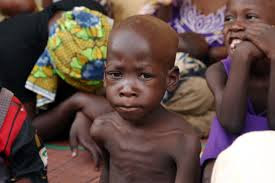 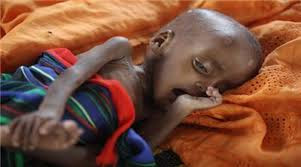 OH my god why you are not trying to ease this struggles not happened any more.
As we know, in the world people who are living with luxury life style, same time other side of the world in DARK AND DARK room.
I have no words to describe this situation. when i was read this news i was shocked, this is not first time but i felt again and again.
So my dear friends please help children who live in Sudan suffer from Malnutrition.
Some two million Sudanese children under five suffer from malnutrition every year, UNICEF’s representative said on Sunday, urging the international community to boost funding to tackle the problem.

Of those two million, nearly 550,000 children have life-threatening severe acute malnutrition, with many of those affected living in the underdeveloped east and conflict-hit Darfur region.

“Over 38 percent of children under the age of five are chronically malnourished across Sudan,” said Geert Cappelaere, the representative of the U.N. children’s agency to Sudan.

The number of children under five affected by chronic malnutrition works out at around two million, he told AFP in an interview. This figure includes 550,000 with severe acute malnutrition.

“In terms of numbers, it is an incredibly huge number of children who are affected by malnutrition in Sudan,” he said.
The worst affected areas are Red Sea State in eastern Sudan and North Darfur State in the west.

Ethnic insurgents have been battling the Arab-dominated Khartoum government in the western Darfur region since 2003, displacing millions and leaving some 300,000 people dead according to the U.N.. 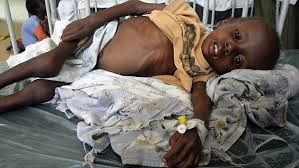 Eastern Sudan has suffered from severe underdevelopment and is one of the country’s poorest regions.

Mothers stopping breastfeeding too early and high rates of diarrhoea among children because of poor sanitation were behind the high malnutrition rates in the east.

Every year, UNICEF in Sudan treats some 150,000 of the most severely malnourished children.

Cappelaere urged the government and international community to contribute more funds, saying that “billions, not millions” of dollars (euros) are needed to reduce child malnutrition levels.

“We need to continue encouraging the government to invest more in malnutrition but at the same time it will have to be a collective responsibility, the international community will have to step up if it is serious in its commitment to help the Sudanese people,” Cappelaere said.
Meanwhile another source said that: 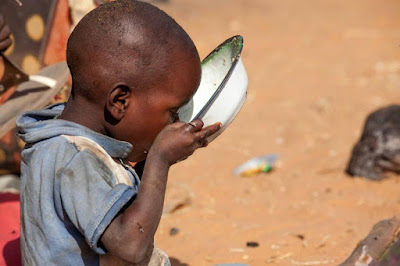 One million children in Sudan under the age of five suffer from acute malnutrition. Some 550,000 among them are severely malnourished and at risk of dying. Another two million are stunted owing to chronic malnutrition.

Of Sudan’s 184 localities, 53 have severe acute malnutrition (SAM) rates that are classified as 'very critical' (above three percent), the UN Office for the Coordination of Humanitarian Affairs (OCHA) in Sudan reports in its latest weekly bulletin.

The highest SAM rates measured are above 20 percent, and are found in three localities in South Darfur and Red Sea states. Most of the children with SAM are found in North Darfur, El Gezira, South Darfur, Khartoum and El Gedaref. These five states carry 51 percent of the national SAM burden.

A S3M (Simple Spatial Survey Methodology used to collect data on child malnutrition) survey conducted by Unicef in 2013 revealed that 128 of the 184 localities in Sudan have a stunting rate classified as ‘high’ (above 30 percent). Moreover, there are pockets of very high stunting rates, found mostly in the eastern states of Red Sea, Kassala and El Gedaref, with the highest being El Gedaref at 73 percent.

This results in an average global acute malnutrition (GAM) rate of 16.3 percent, which is above the 15 percent threshold that constitutes a critical emergency. 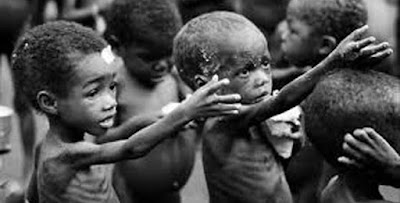 In several localities across the country, however, the GAM rate is alarmingly higher. In Red Sea state, Toker locality has a GAM rate as high as 46.7 percent, and in Agig locality it constitutes 37.4 percent.

Among the Darfur states, the poorest nutrition levels were observed in North Darfur, where El Sereif, Alliet, Dar El Salam, and Kalamindo localities have GAM rates above 25 percent.

Results of the recent Multiple Indicator Cluster Survey (MICS 2014), however, highlight some of the progress being made in child health across Sudan. These include a 21 percent reduction in child mortality rates over the last decade.

Despite these gains, however, child mortality remains very high and the situation of children remains critical, OCHA reports. According to Unicef, the key drivers of this poor situation are the high incidence of communicable diseases amongst children, particularly diarrhoea, measles, pneumonia and malaria, and lack of access to basic services such as quality health care and safe water and sanitation facilities. Ongoing conflict, displacement and food insecurity continue to fuel and exacerbate the situation.

Furthermore, with the start of the lean season all feeding centres for severely malnourished children are experiencing an increasing number of children identified for treatment, leading to overcrowding in hospitals.

In Ed Daein, capital of East Darfur, the international Tearfund organisation recently reported a high number of malnourished children in its stabilisation centre, forcing each bed to be shared by two children.

OCHA further reports that the World Food Programme (WFP) nutrition interventions are constrained by a lack of funding, as well as difficulties in importing nutrition supplements (super cereals) because of genetically modified organism (GMO) regulations in Sudan. 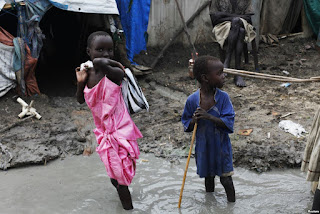 The nearly depleted stocks of super cereals will not be enough to sustain treatment programmes for more than 150,000 acutely malnourished children and pregnant or lactating women in need.

The WFP hopes to mitigate the impact of these shortfalls by locally procuring some quantities of super cereals, the OCHA bulletin reads. The UN organisation is also working closely with the Sudanese Bio-Safety Council to address the government’s zero tolerance for GMO in specialised food to resolve the issue.
at November 22, 2015 No comments: