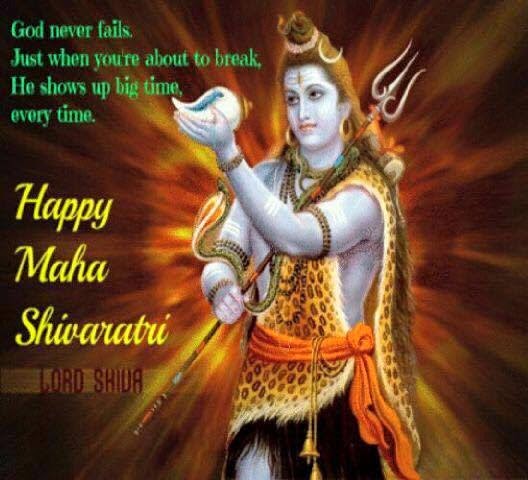 In the Indian culture, at one time, there used to be 365 festivals in a year. In other words, they just needed an excuse to celebrate everyday of the year. These 365 festivals were ascribed to different reasons, and for different purposes of life. There were to celebrate various historical events, victories, or certain situations in life like harvesting, planting, and reaping. For every situation there was a festival. But Mahashivarathri is of a different significance.

"Mahashivaratri marks the night when Lord Shiva performed the ′Tandava′. It is also believed that on this day Lord Shiva was married to Parvati Ma. On this day Shiva devotees observe fast and offer fruits, flowers and bel leaves on Shiva Linga"

The fourteenth day of every lunar month or the day before the new moon is known as Shivarathri. Among all the twelve Shivarathris that occur in a calendar year, Mahashivarathri, the one that occurs in February-March is of the most spiritual significance. On this night, the northern hemisphere of the planet is positioned in such a way that there is a natural upsurge of energy in a human being. This is a day when nature is pushing one towards one’s spiritual peak. It is to make use of this, that in this tradition, we establish a certain festival which is night-long. One of the fundamentals of this night-long festival is to ensure that – to allow this natural upsurge of energies to find their way – you remain with your spine vertical – you stay awake.

Mahashivarathri is very significant for people who are on the spiritual path. It is also very significant for people who are in family situations, and also for the ambitious in the world. People who live in family situations observe Mahashivarathri as Shiva’s wedding anniversary. Those with worldly ambitions see that day as the day Shiva conquered all his enemies.

But, for the ascetics, it is the day he became one with Mount Kailash. He became like a mountain – absolutely still. In the yogic tradition, Shiva is not worshipped as a God, but considered as the Adi Guru, the first Guru from whom the knowledge originated. After many millennia in meditation, one day he became absolutely still. That day is Mahashivarathri. All movement in him stopped and he became utterly still, so ascetics see Mahashivarathri as the night of stillness.

This scientific fact is an experiential reality in every yogi. The word “yogi” means one who has realized the oneness of the Existence. When I say “yoga,” I am not referring to any one particular practice or system. All longing to know the unbounded, all longing to know the oneness in the Existence is yoga. The night of Mahashivarathri offers a person an opportunity to experience this.

The Mandi festival or fair is particularly famous as this special fair transforms the town of Mandi into a venue of grand celebration, where all Gods and Goddesses of the Mandi district, said to number more than 200, assemble, starting on the day of Shivaratri. The town of Mandi, located on the banks of the Beas River, is popularly known as the "Cathedral of Temples" and is one of the oldest towns of Himachal Pradesh, with about 81 temples of different Gods and Goddesses in its periphery. There are several legends linked to the celebration of Shivaratri. The festival is centered around the protector deity of Mandi "Mado Rai" (Lord Vishnu) and Lord Shiva of the Bhootnath temple in Mandi. This festival is celebrated with great fervor in Mandi and it is common to see many foreign tourists throng to this region, especially to partake in the Maha Shivaratri celebrations in Mandi, Himachal Pradesh.

Shivarathri, is the darkest day of the month. Celebrating Shivarathri on a monthly basis, and the particular day, Mahashivarathri, almost seems like celebration of darkness. Any logical mind would resist darkness and naturally opt for light. But the word “Shiva” literally means “that which is not.” “That which is,” is existence and creation. “That which is not” is Shiva. “That which is not” means, if you open your eyes and look around, if your vision is for small things, you will see lots of creation. If your vision is really looking for big things, you will see the biggest presence in the existence is a vast emptiness. A few spots which we call galaxies are generally much noticed, but the vast emptiness that holds them does not come into everybody’s notice. This vastness, this unbounded emptiness, is what is referred to as Shiva. Today, modern science also proves that everything comes from nothing and goes back to nothing. It is in this context that Shiva, the vast emptiness or nothingness, is referred to as the great lord, or Mahadeva.

Every religion, every culture on this planet has always been talking about the omnipresent, all-pervading nature of the divine. If we look at it, the only thing that can be truly all-pervading, the only thing that can be everywhere is darkness, nothingness, or emptiness. Generally, when people are seeking well being, we talk of the divine as light. When people are no longer seeking well being, when they are looking beyond their life in terms of dissolving, if the object of their worship and their sadhana is dissolution, then we always refer to the divine as darkness.

Light is a brief happening in your mind. Light is not eternal, it is always a limited possibility because it happens and it ends. The greatest source of light that we know on this planet is the sun. Even the sun’s light, you could stop it with your hand and leave a shadow of darkness behind.

But darkness is all-enveloping, everywhere. The immature minds in the world have always described darkness as the devil. But when you describe the divine as all-pervading, you are obviously referring to the divine as darkness, because only darkness is all-pervading. It is everywhere. It does not need any support from anything. Light always comes from a source that is burning itself out. It has a beginning and an end. It is always from a limited source. Darkness has no source. It is a source unto itself. It is all-pervading, everywhere, omnipresent. So when we say Shiva, it is this vast emptiness of existence. It is in the lap of this vast emptiness that all creation has happened. It is that lap of emptiness that we refer to as the Shiva.

On the one hand, Shiva is known as the destroyer. On the other, he is known as the most compassionate. He is also known to be the greatest of the givers. The yogic lore is rife with many stories about Shiva’s compassion. The ways of expression of his compassion have been incredible and astonishing at the same time. So Mahashivarathri is a special night for receiving too.